The release of Mac OS X 10.6 (Snow Leopard) has rendered Affrus 1.0 unusable. Over the last few years I’ve done little with the Affrus Perl debugger and I get regular queries about what is happening with the product.

After several attempts to make Affrus 1.0 work on later Snow Leopard, I gave up. Affrus 1 was built using CodeWarrior and Carbon and the transition to Xcode and modern versions of Carbon proved too difficult. However, I can report that over the last few months, work has resumed on Affrus 2.0 which is a re-implementation of Affrus using Xcode and Cocoa.

Here’s a screenshot of the work to date running on Snow Leopard: 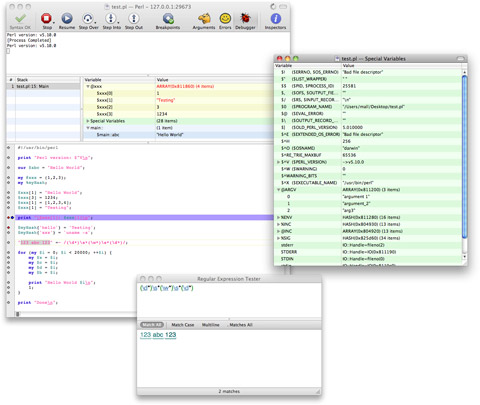 I am being deliberately circumspect about describing the product’s features and system requirements to avoid breaking any promises when the product is finally released.

I am not yet at a point where I feel comfortable inviting Beta testers to use the product, but it won’t been too much longer.