While I was distracted with my late wife’s illness, Script Debugger’s 20th anniversary came and went.

Development on Script Debugger 1.0 started in 1993. Version 1.0 was released in late 1994 and was introduced publicly at MacWorld in San Francisco in January 1995. We shared a booth with FrontMost (later renamed FaceSpan) by Software Designs Unlimited.

Here’s how Script Debugger looked back then.

Interestingly, Script Debugger 1 may never have been a product. I was very uncertain about how to market and sell what was really a $129 piece of shareware. BBEdit was the only model of how this could be done by an independent developer. Remember, the Internet was not as it is today. Software was shrink wrapped in boxes containing floppy disks and printed manuals. It took serious cash to produce product. I had 2000 copies made at a cost of CDN$20,000 (1994 $s). The packing boxes filled an entire room in my basement. Software was sold through mail order outlets (MacTech, Apple’s Developer Central, and others) and trade shows like MacWorld and WWDC. The Mac had no presence in computer stores at that time.

I vividly recall standing outside the MacTech booth at WWDC 1995 in San Jose watching people walk up and purchase Script Debugger. I just could’t believe it was actually happening after all the work that had gone into getting those shrink-wrapped packages onto the MacTech shelves. I developed such an appreciation for how things as mundane as a can of soup get onto a store shelf.

Our daughter was born in 1995, and Gerry left her job to work full time with me. We were so naive. We had no idea what we were signing up for.

Script Debugger 2.0 was introduced in 2000, and went on to win the Mac World Eddy for best development tool (we were up against BBEdit that year – I think Rich and the guys promised Gerry a bottle of champaign – I was at home looking after our 4 year old daughter). I was bummed because I later discovered the presenter that year was John de Lancie who played one of my favourite Star Trek Next Generation characters “Q”.

Here’s a little of how Script Debugger 2 looked at the time:

The big advancement in Script Debugger 2 was the object model explorer which let you see an application’s live scripting interface. This was huge at the time, and to this day, sets Script Debugger apart.

After Script Debugger 2 was released, Apple had its near death experience and our business simply stopped (literally went to zero) in the space of 3 weeks.

During the period that followed, we developed an Adobe Illustrator plugin that made Illustrator scriptable from the Mac with AppleScript and from Windows with Visual Basic. Adobe later purchased this code from us and this went on to form the genesis for the scriptability found in Illustrator, PhotoShop and Acrobat (InDesign had its own killer scripting implementation before we arrived on the scene). The product, named ScripZ, was demoed by Sal Soghoian at that year’s MacWorld Jobs led keynote. We were in meetings with Adobe to conclude the sale of the software right behind the black curtain beside the stage as the keynote was taking place – crazy.

In 2002 we released Script Debugger 3.0. Script Debugger 3 had pretty much the same look and feel as 2.0. We went on to be the runner up for that years MacWorld Eddy for best development tool (I think CodeWarrior got it that year).

The big news for Script Debugger 3 was native Mac OS X support and the integration of our JavaScript scripting system into the product. 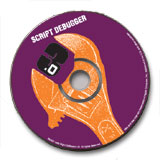 In 2006, Script Debugger 4.0 was released. Script Debugger 4 became a Cocoa/Objective-C/C++ application (previously it was a THINK Class Library/C++ application) and received a UI overhaul which adopted the Mac OS X look and feel, and introduced concurrent script execution where scripts open in different windows could be debugged at the same time. 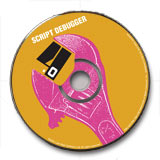 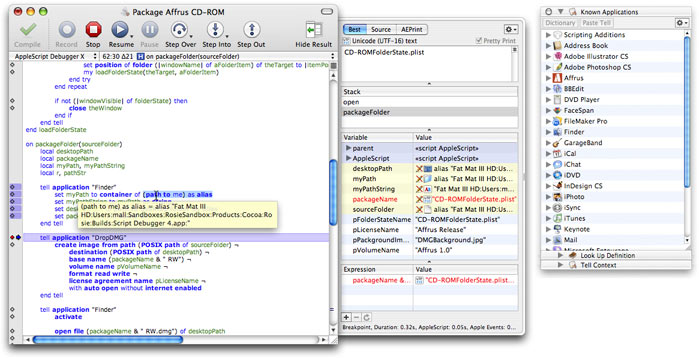 And finally, in 2012 we released Script Debugger 5.0. Yet another UI overhaul. JavaScript was dropped (irony). Tabbed windows were introduced. Yet another rewrite of many internal components to make the product more maintainable and drop legacy Mac OS stuff, much dating back to the Classic Mac OS days. 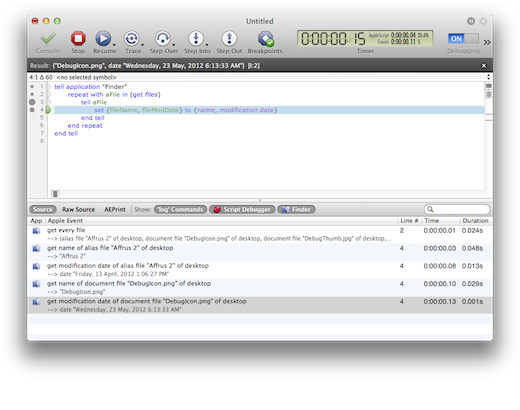 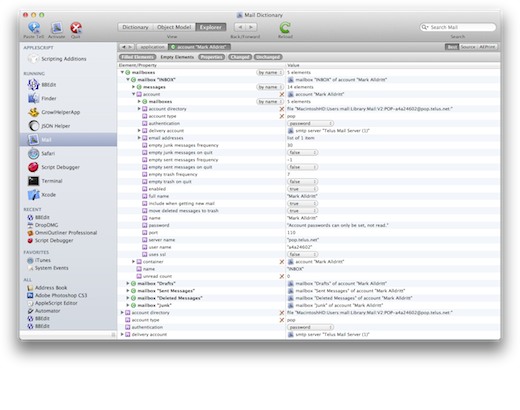 Along the way there were other products: ScripZ (the Adobe Illustrator scriptability plugin acquired by Adobe), TagOn (an Adobe InDesign plugin for importing QuarkXPress documents), Affrus (A Perl IDE/Debugger) and of course the ill-fated FaceSpan 5. Then there were the freeware items: XML Tools, XSLT Tools, Plist Tools, Record and List Tools, JavaScript OSA and others I cant remember. All in all there have been more than 40 Script Debugger releases (major and maintenance releases).

While I did all the development on Script Debugger, it was not me alone. Gerry was there throughout the ups and downs running the business, executing the marketing and sales plans. She and I worked together in the same office for most of these 20 years. Matt Neuburg has been there throughout producing all our documentation (amazingly taking over from our first tech writer and creating the SD1 manual in 3 weeks!) and serving as my sounding board for so many years. Other lesser known individuals include Frances Hunter (she produced the original Script Debugger 1.0 printed manual), Lorin Rivers doing marketing and Bryan Bell did all the icons starting with Script Debugger 3. Adrian Ruigrok developed much of FaceSpan 5 and went on to work for Apple on some of the cool iThingies we all love today. And of course the invaluable support of other developers like Rich Siegel, Jon Pugh, Stephan Somogyi and many many others.

And finally, there are all the relationships that developed with customers through all these years, many dating back to the initial release of Script Debugger 1 (Shane, Ray, Jon, Chuck).

Wow, 20 years of my life involved in developing Script Debugger. My daughter is 19 now and attending college.

I hope I have all these dates more or less correct.

P.S. Here are some interesting facts: